No economic factor is more critical to the determination of global boom-bust cycles than the economy-wide money supply, and yet so few analysts or government agencies have the means to properly calculate this crucial metric. The traditional analysis of money typically focuses on widely-reported government indicators such as M0, M1, or M2, but all of these measurements erroneously include components that do not practically serve as money and therefore lead to false and misleading signals when attempting to analyze important trend changes in the overall economy.

M0, M1, and M2 are frequently justified by modern-day economists as being alternate definitions of money with differing degrees of money “narrowness” that each serve a necessary analytical function. However, the mere existence of such a mishmash of measurements for such a critical calculation is merely a crutch for the fact that most mainstream economists begin their analysis with no rigorous definition of what money actually is in the first place. If M0 is money, then M1 cannot also be money, nor is it appropriate to switch to M2 when either of the first two definitions no longer suite your needs. Something is either money or it is not – there can only be one real definition and identity.

Michael Pollaro over at The Contrarian Take has provided extensive commentary on this topic, coming to agreement with the work of Austrian economist Murray Rothbard’s in defining money as “the general medium of exchange, the thing that all other goods and services are traded for, the final payment for such goods and services on the market”. More specifically, he correctly concludes that money consists of coins, paper bills, and those money substitutes that are “perfectly secure, and immediately convertible, par value claims to standard money.”

Examining more closely what is perhaps the most widely-followed money indicator today, we can see that M2 includes many money-like components that do not properly conform to the definition above, such as money-market funds and time deposits (locked-in deposits held by banks for a specific duration). Time-deposits, for example, are funds loaned to banks for a pre-determined period during which the depositor foregoes access to these funds, thus clearly failing the function of being a money substitute “immediately convertible” into money. Money-market funds, on the other hand, are simply claims by an investor on an asset that itself invests in short term time-deposits such as treasury notes and high-grade commercial paper. While these investments have traditionally been thought of as predominantly riskless assets during normal economic times, they are nevertheless still subject to market fluctuations and the ever-possible risk of default, thus failing the test of being a “perfectly secure” claim on standard money, especially during times of financial turmoil.

Because governments do not properly define money, it is necessary when performing economic analysis of credit cycles to use independent measurements that more closely resemble the quantity of money in circulation at any given moment in accordance with the definition provided by Michael Pollaro above. The money supply indicator most closely resembling this is the True Money Supply (TMS), formulated by the Austrian school of economics, and defined as: standard currency in circulation + demand deposits + savings deposits. More practically, it is the value of official M2, less money-market funds, less time deposits. In reality there are a few more nuanced adjustments required, but for simplicity and brevity, this definition will suffice for the purpose of this article.

If the quibbling over the precise definition of money seems like needless nitpicking and overbearing technical semantics, it is only an issue to those investors who are blissfully unaware of just how predictive the TMS measurement is at forecasting boom-bust turning points and credit cycles in the broad economy. Each of the other official-sector money indicators (M0, M1, M2) are far more than merely misguided and flawed academic definitions of money divorced from the practical considerations of the real world. They provide false indicators and real-time misdirection regarding the ebbs and flows of credit cycles and have greatly contributed to the inability of analysts to correctly see the forewarning of danger based on the excessive government money printing schemes of yesteryear.

Michael Pollaro has for many years now ceased reporting TMS figures publicly, forcing us to now compute this metric independently from publicly available government sources. In the charts below, we show the year-over-year growth rates of both TMS and M2 along with the historical recessions associated with the Dot-com and Housing bubbles of 2001 and 2008 respectively. Numbers have been updated to the end of March 2018. 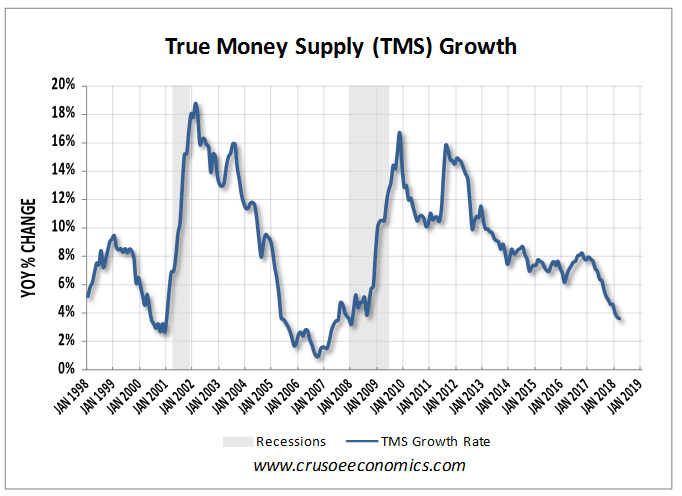 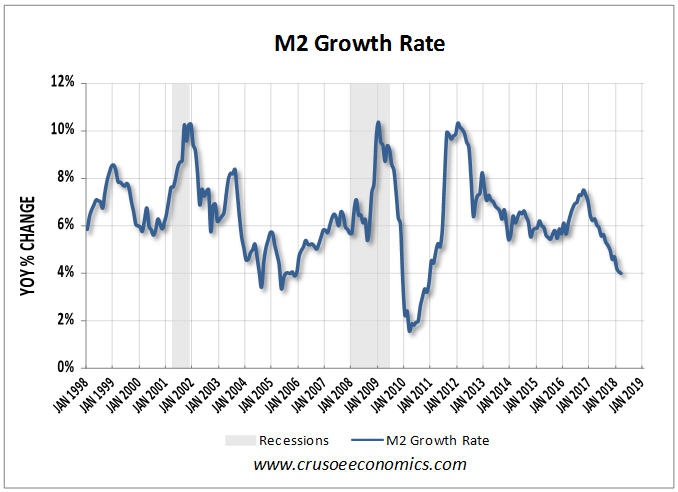 Changes to the TMS and M2 growth rates reflect either looser or tighter monetary conditions which impact the economy through either the fostering of increasing mal-investment (increasing money supply growth) or the exposure of existing mal-investment that must subsequently be liquidated (decreasing money supply growth). In other words, accelerating periods of money supply growth will tend to foster bubbles and the misallocation of capital characterized by the boom years, while the curtailing of liquidity sets in motion the inevitable economic bust reflected by the recession periods in the chart above (for a case study on how money printing drives the boom-bust cycle, see Inflation, the Disease of Money)

Note that even though the money supply indicated by both TMS and M2 has virtually always exhibited positive growth, economic busts have historically been triggered when this growth rate falls below a certain threshold. This threshold is somewhat arbitrary, but it appears that for TMS, when the speed of money creation falls between roughly 4% and 2%, the misallocation of capital can no longer be hidden and the mal-investment is finally exposed for the imprudent and wealth-destroying ventures that they are.

While few analysts today focus on the money supply as a predictive indicator for economic mal-investment and the eventual painful liquidation that it engenders, those that do virtually always mistakenly focus on incorrect monetary indicators such as M2. While it is certainly possible for these aggregates to sometimes move in alignment with TMS, it is equally likely that at any given moment they will diverge in pronounced ways that mislead analysts into making incorrect investment decisions based on erroneous data. When widely-followed indicators like M2 diverge with our own independently-calculated money metric TMS, we can rest assured that in diverging from the consensus view, our adherence to proper and rigorous methods of calculating the money supply will ultimately prove invaluable in keeping us positioned on the right side of the next big economic move.

The above charts make it clear that economic busts are far more reliably predicted by the TMS metric than by traditional money supply measures such as the widely-followed M2. TMS is the best and most accurate representation of money in the economy and therefore serves as the surest way to forecast economic booms and busts according to Austrian Business Cycle Theory. When comparing TMS and M2 above, for example, we note the following discrepancies:

3) M2 growth fell dramatically to less than 2% in 2010, which should have forewarned of a coming economic bust. The economy, however, has not since experienced a significant economic contraction since the housing crisis in 2008.

5) TMS is far more volatile than M2 which provides definitive and far clearer signals of the boom-bust cycle.

It should be noted that while TMS is one of the best indicators of the boom-bust cycle we know of, it nonetheless has a significant downside is that it comes with a variable and non-trivial time-lag. While the Dot-com bust took hold approximately a year after TMS breached 4% in 2000, the 2008 economic bust became apparent more than 2 years after TMS breached 4% in 2005. The duration of the time-lag prior to the subsequent economic contraction isn’t knowable in advance, but it likely has a lot to do with precisely where the mal-investment is concentrated in the economy along with other mitigating factors that may serve to delay the liquidation event further into the future.

In terms of the message for investors today, the money supply growth measured by TMS has only just recently breached the 4% threshold which has in the past been indicative of economic busts. Given the length and magnitude of the current economic bubble and the gross infusion of money in response to the 2008 housing bust, it is likely that this reduced rate of growth is more than enough to expose the massive preceding mal-investment of the past decade. The only factor that would negate this forecast would be if the TMS suddenly reversed higher over the coming months, as TMS growth has only just recently fallen below the 4% “line-in-the-sand” we have drawn somewhat arbitrarily. While we will be watching the TMS number closely over the duration of the year for further signs of weakness to confirm our thesis, it is becoming clearer that the next financial crisis is far closer in our future than many analysts are today predicting.